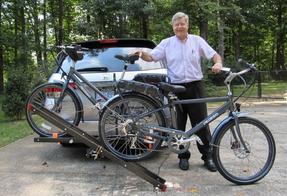 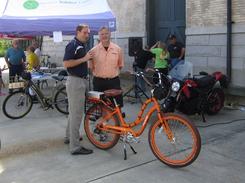 Gerhardt Cycles developed an E-Bike Technician Training Course in conjunction with Pedego and other E-Bike manufacturers. The E-Bike Course won the top award out of 30 entries for the best new course at the 2013 Virginia Community College Annual Conference. A "Train the Trainer" Instructor course is held every fall at the Danville VA Regional Center for Advanced Technology and Training (DCC-RCATT). The Light Electric Vehicle Association (LEVA) offers the course throughout the world. 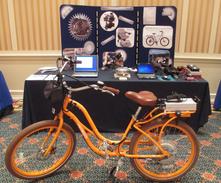 Pedego City Commuter E-Bikes with the Gerhardt Cycles custom E-Bike tilting carrier rack. This is the ideal package (2 Pedegos and a Rack) for the adventurous couple who wants to "Hit" the road and see the USA. The custom rack tilts to make it easy to load an E-Bike without lifting. Each of the two racks can carry 125 lbs for a total of 250 lbs. The rack can accommodate "Fat Tire" bikes with tire widths up to 5.25 inches wide.

Don DiCostanzo, CEO of Pedego Electric Bikes participating in a TV interview at the Danville VA E-Bike and EV Show in 2012. The iconic Pedego orange Comfort Cruiser is shown in the photo. This is one of various E-Bikes that were lent to Danville citizens for 2 week evaluations. The bikes were equipped with Cycle Analyst data loggers to record electrical data and GPS position data for analysis. Results were presented at Interbike 2012 as part of the LEVA presentations. 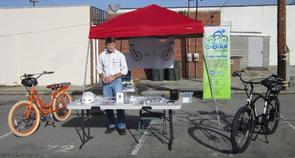 Pedego Electric Bikes was founded in California in 2009 by Don DiCostanzo and Terry Sherry. Their motto is "Hello Fun". Get a Pedego if you want to have fun. Pedego is famous for the best customer support in the bike industy. Pedego has donated bikes and parts to help schools and students in NC and VA. Pedego and Gerhardt Cycles donated parts to  Dudley High School in Greensboro  NC which the students used to build small electric vehicles to compete in the Shell Eco Marathon. Dudley HS students were featured in a film  that won the top award at the Cannes Film Festival in France for documentary films.